The ACCI’s contribution to combating Striga, a virulent pest affecting millions of African smallholder farmers, has been boosted by the completion of another doctoral thesis about this problem.

Dr John Lobulu, who completed his PhD in May, focused on developing maize varieties for Striga resistance and compatibility with the fungal biocontrol agent, Fusarium oxysporum f. sp. strigae (FOS). His work adds to the work done by past graduates, Dr Rebeka Gebretsadik, Dr Emmanuel Mrema and Dr Admire Shayanowako.

Lobulu, who is from Tabora in Western Tanzania, had to overcome several serious challenges on the road to completing his PhD, including Covid-19 disruption and malaria. 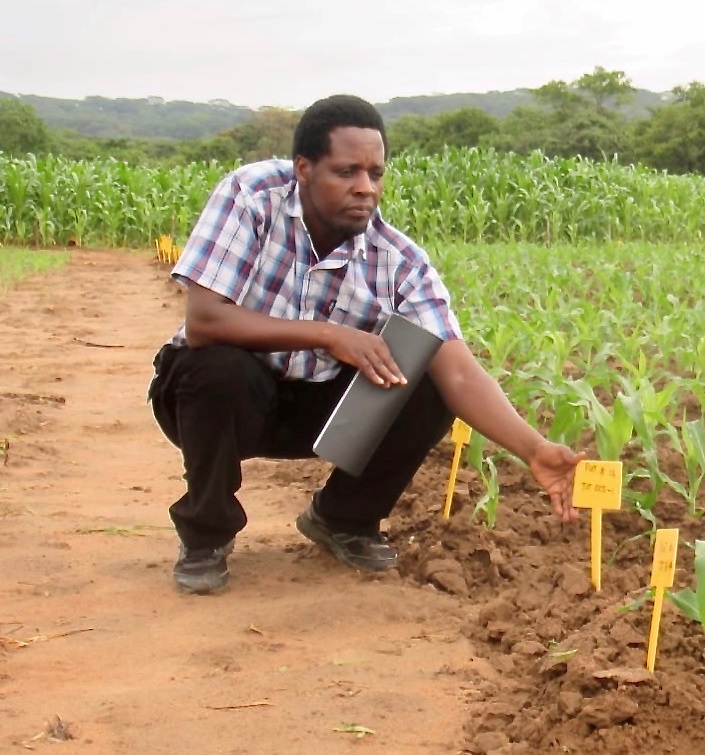 “Covid-19 lockdown prevented me and my peers from going back to South Africa for thesis write-up,” he explained. “So the work was completely online, which had its limitations.”

Then, while writing up his thesis he contracted malaria, which resulted in a two-week hospital stay and multiple clinic visits. “This was the hardest time for me, given the university timeline,” he said.

Lobulu said his PhD research, which was funded by Alliance for a Green Revolution in Africa (AGRA) through the ACCI, was inspired by “the losses caused by Striga in smallholder farmers’ fields”. Striga asiatica and S. hermonthica are the dominant spp in Tanzania, causing substantial yield losses in maize, sorghum, millet and upland rice. Although there are several different methods used to control Striga, no single approach is wholly effective.

Lobulu’s research focused on enabling an integrated Striga management approach for maize, Tanzania’s main staple crop. This entailed developing genotypes for maize that are resistant to Striga asiatica and S. hermonthica and compatible with FOS. Farmer-compatible agronomic practices are also important in this approach.

A participatory rural appraisal (PRA) involving  324 farmers revealed that drought was the main constraint for 97% of them and Striga infestation a close second, according to reports from 93% of participants. Other factors were field insect pests (90%), storage insects (72%) and lack of capital(59%).

In the second study, Lobulu identified new maize genotypes with farmer-preferred traits, superior agronomic performance, Striga resistance and FOS compatibility that can be used either in maize breeding programs or recommended for commercial production in Tanzania.

In the third study  51 genotypes were assessed for economic traits and Sa and Sh resistance under controlled conditions and using 10 diagnostic simple sequence repeat (SSR) markers. This showed significant genotypic variation among the test genotypes for key agronomic traits and resistance to Striga spp.

Cluster analysis based on morphological and molecular markers grouped the genotypes into three main groups, irrespective of their geographic origin. Lobulu identified seven unique parents that are “valuable sources of genetic variation for Striga resistance breeding in Tanzania”.

The final stage was to assess newly developed hybrids of maize genotypes for yield and yield components, Striga resistance and FOS compatibility, and to select candidates for future breeding and variety release.

Twenty parental genotypes were crossed and derived progenies evaluated, with and without FOS treatment at three Striga hotspot sites in western Tanzania. The results showed that there was a significant difference among the hybrids for the assessed agronomical traits, and that progenies treated with FOS had fewer emergent Striga plants than untreated controls. A total of thirteen candidate varieties (eight open pollinated varieties (OPV) and five new single cross hybrids) have been recommended for release and breeding Striga-resistant maize in Tanzania and similar agro-ecologies.

Lobulu, who works with the Tanzania Agricultural Research Institute (TARI) – Tumbi Centre, will continue with this work.

“My plans are to get the Striga-resistant maize (OPV/ Hybrids) varieties to the farmers,” he said.

Lobulu thanked Professor Hussein Shimelis who supervised and mentored him, co-supervisor Professor Mark Laing, In country supervisor Dr Arnold Mushongi, AGRA and the many others who supported him on his PhD journey.

Promising results in two-fisted approach to tackling Striga on maize