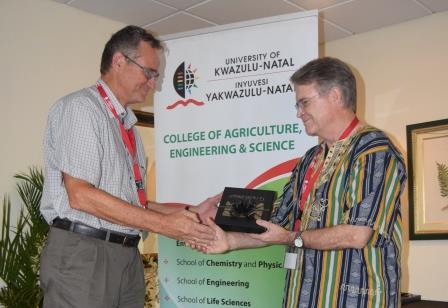 ????????????????????????????????????
The African Centre for Crop Improvement (ACCI) lost a stalwart this week with the retirement of Professor Rob Melis.
Melis was in the first batch of staff recruited by Professor Mark Laing in 2003, a year after the centre opened its doors.
Born and bred in the Netherlands, he studied Tropical Agriculture at the University of Wageningen, eventually focusing on cassava for his PhD which was done through the Botany Department at the University of Natal in 1980.
Before joining the ACCI he worked as a lecturer and research fellow in the Crop Science Department between 1980 and 1990. “That was interesting because we worked with small-scale farmers, which was unusual for the time because it was during apartheid,” he said in an interview.
In 1990 he started a highly successful seed company, breeding dry beans for southern Africa. Speaking at the award ceremony, Laing said Melis’ dry bean and green bean varieties “dominate the seed market across the region. If you buy a bag of dry beans there is a very high likelihood that it is one of Rob’s varieties.”
Melis also branched out into tomato, paprika, chilli and sweet pepper breeding and he has bred, registered and marketed more than 50 crop varieties. He is also an accredited seed certification and phytosanitary inspector for beans, tomato and capsicum species.
In 2003 he joined the ACCI as a part-time associate professor in plant breeding, to lecture and supervise students while giving back to the profession of plant breeding. He says it was here that he enjoyed some of the most rewarding moments of his career, seeing the progress made by his students. “I worked with some very good students and seeing them flourish and moving into their careers was a highlight,” he said.
Another highlight has been the extensive travel across the continent that he’s done as a supervisor visiting students in their home countries. “You don’t go as a tourist, you meet students and their families and stay in villages. It’s been hectic a few times and quite an eye-opener, but it was pioneering work for the university ,” he said.
In his time at the ACCI Melis has graduated 29 PhDs and six MSc students. “Rob is a precise, demanding supervisor, which has resulted in outstanding quality of research and publications in top journals, with 65 journal articles to date,” said Laing. “He has had a remarkable career and his contributions can be seen across Africa in terms of his graduates and crop cultivars.”
Melis plans to carry on working at Ukulinga, the university farm where he does the breeding for his seed company, and says he will work with students there informally. “Not in any official capacity, I don’t want an office,” he is quick to point out.
“I want to t help improve the facilities at Ukulinga. Not for reward. The university has been very good to me and to my business, allowing me to use the facilities. I’ve benefited, so it’s payback time.”