The ultimate goal of any plant breeder is to have their improved variety released to farmers AND embraced by them. Farmers’ approval is crucial, because if they don’t like a variety they simply won’t plant it, meaning that breeding work done beforehand was a waste of time and money.
ACCI graduate Dr Fekadu Gurmu had the satisfaction of seeing two of his sweet potato varieties released in Ethiopia recently that had been chosen by 5000 farmers as their top two choices out of 12 varieties evaluated by them.
Gurmu is the co-ordinator of the National Root Crops Research Programme at South Agricultural Research Institute in Hawassa and the two varieties that were released were developed from crossing that he did for his PhD in 2013. 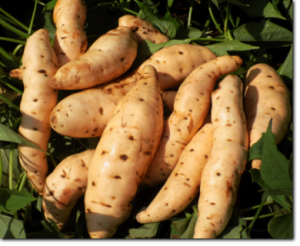 Sweet potato is a food security crop in Ethiopia. Gurmu says white-fleshed varieties dominated the production system until 2005, when some orange-fleshed sweet potato (OFSP) varieties were released and distributed to farmers.
However, although OFSP varieties are nutritionally superior because of their higher beta-carotene (pro-vitamin A) content, the released OFSP varieties were not well received by farmers because of their low root dry matter content (RDMC). This trait is preferred by moist sweet potato consumers in Ethiopia and that deficiency resulted in a low rate of adoption of the OFSP varieties.
In 2013, as part of his PhD research, Gurmu crossed white-fleshed varieties with the OFSP varieties to develop OFSP varieties with both high dry matter content and high beta-carotene (pro-vitamin A) content. Other characteristics of these varieties include a high rate of survival after planting, high root yield and moderate resistance to sweet potato virus disease.
Gurmu has been testing the progenies for the past six years in different locations and stages. They went through a grueling multi-stage evaluation process that included input by farmers and a committee assigned by the Ministry of Agriculture, before being approved for release by the National Variety Release Standing Committee earlier this month. The committee also approved the registration of a third variety that has been introduced from Uganda.
Close Menu